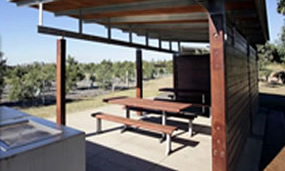 This timber was reclaimed from several sites throughout Australia, and had to be structurally sound when placed into the series of open and half-open “boxes” in the playground.
This site was unique that it is home to the endangered green-and-golden bell frog, so much care was taken during construction to ensure there would be no environmental damage .

Some of the timbers used on site include: